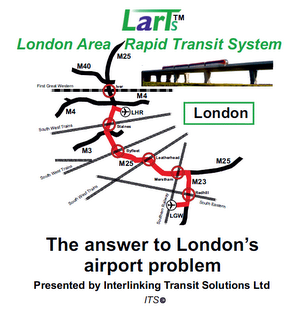 "Utilising the available space alongside the motorways for a light rapid transit, permits LARTs to connect with existing railways as well as London's two main airports. The grade-separated system constructed alongside the motorways will carry small trains, with high frequency-of-service, at moderate speeds, and inter-link directly with airport terminals railway stations, and car-parks.

Airport terminals can be connected directly to conventional train network via LARTs with walking distances under 110 metres. This permits efficient airport-to-airport connections as well as flight-to-flight and flight-to-rail connections that don't presently exist. The terminal-to-terminal strategy already accommodates airside-to-airside connections for baggage, and this can be extended to passengers. Only light rapid transit technology makes the integration of the airports possible with benefits such as flexibility, cost, frequency and connectivity listed as main attributes.

Stand-alone technology that integrates road, rail, and air is the unique proposition made by LARTs as its basis for financial viability. The business model benefits from the ‘stand alone’ technology which contributes independently to the existing infrastructure. This permits a decisive board of directors, with a transparent corporate structure that can deliver dividends to both stakeholders and investors, and a minimum demand on the public purse.