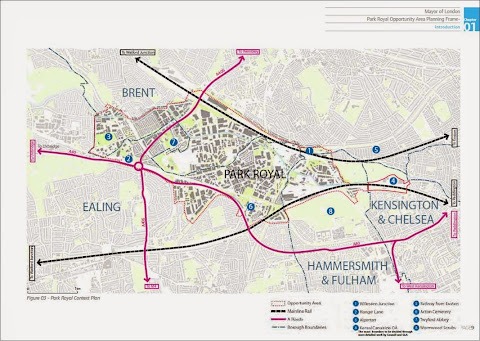 "The Park Royal Opportunity Area Planning Framework was adopted by the Mayor in 2011. It is available here:

Since that time, the Government has announced proposals for a new High Speed 2 (HS2) and Crossrail station at Old Oak by 2026, potentially making it one of the best connected railway stations in the UK. This could give rise to significant potential for economic development, jobs growth and new homes. The Mayor of London also sees this as an opportunity  to regenerate the wider area.

Based around the new HS2 and Crossrail station at Old Oak, the Mayor, Transport for London (TfL), plus the London Boroughs of Hammersmith & Fulham, Brent and Ealing, have been considering the potential for regenerating the area and are seeking views on a 30-year Vision for Old Oak. This could transform the area with up to 90,000 jobs and up to 19,000 new homes, schools, open spaces, shops and leisure facilities.

The Greater London Authority (GLA), Transport for London (TfL) and the London Boroughs of Ealing, Brent and Hammersmith & Fulham (LBHF), produced a Vision for the Old Oak Area, which investigates the potential for regeneration and growth in the area around the proposed Old Oak Common High Speed 2 (HS2)/Crossrail Interchange. [Kensington & Chelsea threw its toys out of the pram, and now has visions of its own.]

The public consultation ran for 12 weeks between 28 June 2013 and 20 September 2013, and the two reports provide information on the outcome of this consultation. The first report outlines the strategy followed, provides detail on who was consulted and how, as well as summarising the key issues raised. The second report provides a detailed breakdown of all 614 responses received during the consultation.

The project team is now reviewing the comments and the next steps will be to produce an updated and revised Old Oak - Opportunity Area Planning Framework (OAPF) that addresses these comments. A further round of consultation on will [sic] then take place in Autumn 2014 [it didn't], following which Mayor of London will adopt the plan as an Opportunity Area Planning Framework [it hasn't yet].

A new 'atlas' that shines a light on the 2,000 businesses based at Park Royal and aims to ensure they can maximise the enormous benefits of one of the largest regeneration schemes in Europe has been launched today (Friday, May 23).


Relatively little was known about the diversity of Park Royal’s businesses and their role in London’s economy until this mapping exercise was conducted. The survey identified that key sectors include food manufacturing and the film industry and that in the last year alone individual Park Royal businesses provided London with 240,000 bouquets of flowers, 300,000 rolls of sushi, 3,000 recording sessions and supplied 24,000 books to university libraries.


The eastern corner of Park Royal, known as Old Oak Common, is set to be transformed when a ‘super hub’ High Speed 2 (HS2) and Crossrail Station is built by 2026. Old Oak Common will become a new district with up to 24,000 new homes and more than 55,000 jobs. The Mayor of London Boris Johnson is also working hard to strengthen and enhance the important industrial offer of the rest of Park Royal.


The Park Royal Atlas is the first ever detailed study of the capital’s largest industrial estate, often dubbed 'London’s Kitchen'. It uses data collected from months of surveying and interviews to give an insight into what people produce, the facilities they operate from and improvements to the area they would like to see.


The study will inform policies and strategies for intensification and economic growth, support inward investment and celebrate and market the diverse services of Park Royal and its contribution to London’s economy.


The Atlas was launched today by Kit Malthouse, Deputy Mayor for Business and Enterprise, at Fit Out UK, a business based at Park Royal.


"Since its beginnings over a century ago, Park Royal has become one of the most significant industrial areas in Europe, boasting some hugely successful UK brands such as McVities, Carphone Warehouse and Diageo and employing more than 30,000 people.

The arrival of HS2 and Crossrail will be a real game-changer for Park Royal. This fascinating, in-depth study of all of its business activities will ensure Park Royal can reap the benefits of the planned regeneration and continue to thrive and grow for another hundred years."


To view the Atlas visit
http://www.london.gov.uk/priorities/regeneration/publications-guidance

• The Mayor of London intends to create a Mayoral Development Corporation (MDC) to unlock the enormous regeneration potential of Old Oak Common and Park Royal.


• Researchers carried out a census of nearly 2,150 workplaces in the area including interviews with 244 businesses, giving an insight into their needs and evidence of their key role in London’s economy using graphs, maps, case studies and images. The study found that 75% of workplaces are micro businesses with less than 10 employees.


• Of the 244 interviewed, over two thirds are independent businesses, 47% are anticipating growth and 55% mentioned road and public transport accessibility as a key strength of the area. Common issues were the quality and condition of public realm, car parking and the need for local amenities.


• The Park Royal Atlas is an employment study prepared by the Mayor’s Regeneration Team and cliented [sic] by the Old Oak Common Joint Authority Project Team including the Mayor’s Planning Team, Transport for London, Brent, Ealing and Hammersmith & Fulham, and in association with the Park Royal Business Group.

The Employment Land Review will assess the demand for industrial and related land uses over a 20 year planning period and compare that demand with the expected supply, having regard to current proposals for Old Oak Common around the new Crossrail and Great Western Mainline / High Speed 2 (HS2) stations.

The Review will be coordinated by the GLA Regeneration Team with tasks undertaken by GLA Planning staff. External consultants will undertake specialist tasks.

The Review will take up to 4 months from commencement to completion.

That's enough excitement for one day.
Link to HOME (see all posts).