"HS2 is not just another railway. It is being developed by going back to first principles on what a railway is for." 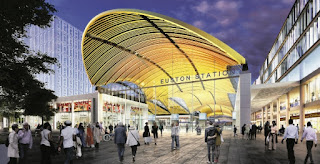 "It will be the backbone of travel between many of our biggest cities for this century and the next. Much has been talked about economic effect, capacity and so forth, but fundamentally it is about people travelling – we want to create a railway people look forward to using, whether for work, study, to meet friends and relations or visit places. We want it to be their first choice, and for that it has to be attractive. So in designing HS2, our starting point is our future passengers.

"We expect more than a quarter of a million journeys a day on HS2 by the late 2030s. These are individual journeys by individual people with differing needs, wants and values, so HS2 has to be for everyone. We are designing around the passenger by imagining what they will want and then engineering around them. To help us, we’ve been working with a panel of real passengers brought together independently by Transport Focus (formerly Passenger Focus).  They come from diverse backgrounds – people who travel for all manner of reasons and with different mobility needs. We have asked them what bugs them about current travel, and to think what they would like the next generation to experience when they choose HS2."

Building skills and expertise in the UK


"A system which transports people safely and reliably at 225mph, where the contact point between wheels and rails is the size of your fingernail, requires engineering which is similar to Formula 1 and the aerospace industry. Our universities have fabulous young people, and the advanced engineering of high-speed rail attracts them to make their careers in HS2 in a way that perhaps the old railway does not. So we work with leading universities both to develop the science of high-speed rail and to show that people who join us can make a difference with early responsibility.

"The precision skills for building then operating and maintaining HS2 offer opportunities for a new generation of people. But these skills being made ready and available is not being left to chance. We are supporting the development of high-speed rail colleges in Birmingham and Doncaster with connections across the further education sector. Both are designed to provide high-level vocational education and training. It will be a one-stop shop for training the next generation with the skills and expertise we will need, and to be a beacon of excellence for the rail industry as a whole.

"This is important because too many people still see rail as being a difficult, dirty and relatively crude industry. HS2 will be the project that changes those perceptions and helps to inspire the next generation of rail engineers.

"Whatever the journey and price paid for it, we have taken on some basics. Alongside bringing people closer together and saving them time, the essence of high-speed rail, we have already taken on the dependability and reliability of every journey. Firstly, this means punctuality every time, all year round – as in, you’ll be able to set your watch by an HS2 train’s arrival. It means designing systems that not only guarantee you a seat but that also enable you to choose where you sit, even if you decide to travel at the last moment. This technology will also guide you to that seat through an HS2 station via the most direct route at the right time – reducing stress. No crowding round departure boards followed by the trolley-dash to the train when your platform is announced."


"In designing HS2, we focused on softer words like 'easy' and 'convenient', and our passenger panel is helping us translate these into the design – such as in level access, for example. Of course, this is an issue for disabled people, but it’s also one for anyone carrying heavy bags, or families with small children. Easy, step-free access works for everyone and, because people board trains quicker without steps, it saves time and aids train punctuality.

"When on the train we know people want their luggage close by for peace of mind. So we will design the train accordingly. This too helps punctuality, as we cut out the queue to stack luggage by the doorways."


"We also realise that once seated, different people want different things depending on their journey.  At the start of the day you might want a quiet place to work or prepare for the day ahead. Another time you might want a more convivial atmosphere to talk to friends or colleagues. And when you have a young family, you don’t want to be next to people wanting library-like quietness! Our panel also reinforced that a clean train with clean facilities, including toilets, and high speed Wi-Fi were basic human rights in the 21st century railway. So we are asking ourselves how to design trains that are flexible – and because HS2 is being built from scratch, we are free to design without the constraints of our essentially Victorian railway."


"We are designing for up to 18 trains an hour to and from London at peak times – one every three or four minutes. Each with the capacity of up to 1,100 passengers – equivalent to more than two jumbo jets – which reinforces this as a railway for everyone. Think of HS2 as a metro – a high-speed inter-city metro with every journey a personalised one. It's a vision which excites my diverse design team, which is a blend of seasoned engineers fired up by making something that will last many generations, and exciting young designers challenging them.

"It's not only those who travel on HS2 who will benefit. The new line will have enormous capacity – the equivalent of two motorways’ worth of passengers on just two tracks. It will carry much of the north-south inter-city rail traffic, releasing space on the existing mainlines for more commuter services into our major cities, and more freight by rail too. Over the last 20 years, passenger numbers have doubled and continue to grow at more than 5 per cent a year.

"People are social beings – we travel to meet each other. Connectivity matters because Britain’s future is as a knowledge-based economy. Despite living in a hi-tech age, face-to-face meetings matter. Creative industries, finance or the law all value easy access to clients, competitors, talent and skills. It’s why they have clustered in London. But the capital is one of the world’s most expensive cities in one of the West’s most open and dynamic economies."


"HS2 will open up alternatives to being based in London through its complete reliability, capacity and reduced journey times. Indeed, some people said the banks would never move their operations out of London. Yet last March HSBC announced it was relocating its retail headquarters – along with 1,000 jobs – to Birmingham, citing HS2 as a key factor. It just shows how attractive regional cities could be if we can dramatically improve connectivity.

"Alternative schemes, such as revamping existing rail links, introducing double-decker trains or lengthening platforms can only provide a limited amount of extra capacity, often at great expense. By contrast, HS2 will triple the number of seats out of London Euston. No combination of existing rail upgrades could possibly deliver that amount of new capacity.

"We need to crack on and get HS2 built and operating as soon as we can. New transport modes come along about once a century. Development of canals in the 18th century helped trigger the Industrial Revolution. The 19th century brought the railways, making possible mass passenger and goods transport and the growth of cities. The last century brought the car, enabling personal freedom of movement.

"High-speed rail can be for our century – efficient and utterly reliable, providing safe travel between the major cities on which much of our economic wealth is based. And using our new approach to design and technology, we can personalise travel so you, the passenger, are in charge of your own journey. We want you to choose HS2 because it works for you, not because you have to."