"How Amsterdam became the bicycle capital of the world"

"In the 1960s, Dutch cities were increasingly in thrall to motorists, with the car seen as the transport of the future. It took the intolerable toll of child traffic deaths – and fierce activism – to turn Amsterdam into the cycling nirvana of today"


"Anyone who has ever tried to make their way through the centre of Amsterdam in a car knows it: the city is owned by cyclists. They hurry in swarms through the streets, unbothered by traffic rules, taking precedence whenever they want, rendering motorists powerless by their sheer numbers.

"Cyclists rule in Amsterdam and great pains have been taken to accommodate them: the city is equipped with an elaborate network of cycle-paths and lanes, so safe and comfortable that even toddlers and elderly people use bikes as the easiest mode of transport. It’s not only Amsterdam which boasts a network of cycle-paths, of course; you’ll find them in all Dutch cities.

"The Dutch take this for granted; they even tend to believe these cycle-paths have existed since the beginning of time. But that is certainly not the case. There was a time, in the 1950s and 60s, when cyclists were under severe threat of being expelled from Dutch cities by the growing number of cars. Only thanks to fierce activism and a number of decisive events would Amsterdam succeed in becoming what it is, unquestionably, now: the bicycle capital of the world." 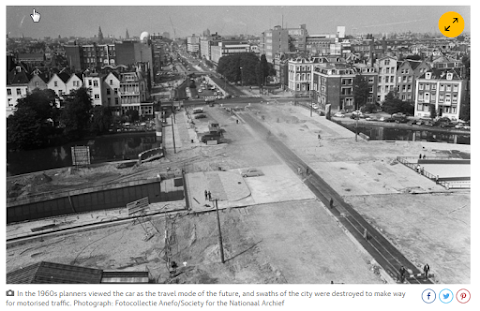