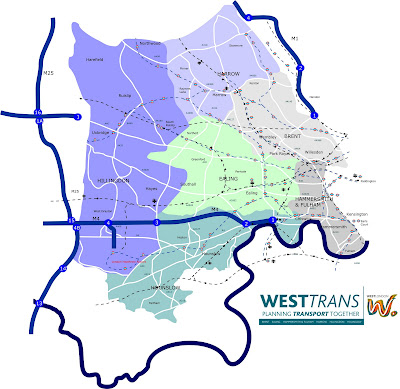 "The six West London Boroughs of Brent, Ealing, Hammersmith & Fulham, Harrow, Hillingdon and Hounslow have worked together since 1997 on transport issues of common concern, originally under the name of the West London Transport Strategy (WLTS).

The WestTrans Partnership, led by Ealing Council, provides support on transport issues to West London Business and West London Alliance, and liaises closely with other key stakeholders such as Park Royal Partnership, the education & training and health & voluntary sector organisations.

Since its inception, through TfL's LIP programme, each year WestTrans has been successful in securing significant levels of funding to support the many and varied initiatives that it has implemented and continues to develop. This year WestTrans has secured £1.225m for the development of schemes, and has the potential to implement a further £670k of improvements subject to funding. Initiatives include:
The Partnership has and continues to face significant challenges in meeting transport demand, reliability and quality issues that are presented as a result of economic expansion and growth associated with development and leisure activities in the region. With an economy larger than that of Frankfurt, West London already has a very broad spectrum of businesses and employment and has benefited from the proximity to Heathrow as the primary 'International Gateway to Britain'.
No comments:

"The government spends more money on transport projects for Londoners than on those for the rest of the country combined, a think tank says.

"The Institute for Public Policy Research North says £2,700 is spent per person in London, compared with £5 per head in the north-east of England."
No comments:

Lord Foster: The Future of London and Britain

"Imagine how differently we might understand the modern world if we could travel back in time. We would discover that the cathedrals, the castles and the viaducts that form our 'heritage' were once new themselves and were seen as quite alien at the time; and that many of the landscapes we revere as 'natural' were in fact shaped subtly by man - some the outcome of the Industrial Revolution itself. We would also find that many of the challenges we face now have been met before.

Given the need to upgrade Britain's infrastructure for the 21st century, and in the absence of a time machine, we have to try to recapture the foresight and political courage of our 19th century forebears and to revive our traditions of architecture, engineering and landscape design. We have to draw lessons from our heritage, as well as inspiration from our Asian counterparts."

The OTHER Thames estuary airport plan (well, one of them)

"Bluebase initially developed Thames Reach Airport in 2002, following the SASIG report 'Does Aviation Matter?', with the conviction that the airport and associated infrastructure benefits will transform the Thames Gateway region into a well-serviced, world-class, 21st century metropolis.

"The project has developed with the support of leading UK consultants in aviation, construction, transportation, finance and cost planning."
No comments:

"The two TBMs currently being prepared are for the boring of the tunnels from Royal Oak Portal. The first of these now sits at Herrenknecht’s German plant, where it is undergoing final factory testing. It will shortly be dismantled and shipped to the UK, where it will be reassembled on the portal ramp at Westbourne Park.

"... Crossrail have confirmed that there have been very general, hypothetical discussions about the possibility of reconditioning and reusing the TBMs, should Crossrail 2 make it definitively off the drawing board."

And if tunnelling floats your boat, here's another in East London:

The Economist: "Quietly, a huge new port is being built close to the capital"

"SOME 25 miles east of London, on the site of a former oil refinery, the biggest infrastructure project most people have never heard of is under way.

"The port’s developer is DP World, the third-biggest ports company in the world, and owned by the emirate of Dubai. It is also building one of Europe’s largest logistics parks next to the docks.

"At the new port, containers can be transferred straight to warehouses, with the cargo leaving in smaller loads going directly to the south-east’s shops. London Gateway claims this will save millions of miles of lorry journeys, equivalent to taking 2,000 vehicles a day off Britain’s roads."
No comments:

The Guardian: "London's new airport: should Beijing be a blueprint for the Isle of Grain?"

"Architect Norman Foster says a Thames estuary hub is essential for Britain's economy; critics warn of a £50bn white elephant that could harm the environment."


"What is at stake, according to all sides of the argument, is nothing less than the economic and spiritual future of the nation. We are in danger of 'denying future generations to come', says architect Lord Foster. It is about the importance of our 'world-class natural environment', says the Royal Society for the Protection of Birds. It could be a 'white elephant' that would deal a near-fatal blow to our economy, says Sir Terry Farrell, another leading architect [including of Old Oak Common]. Also at stake is national identity: how much Britain should try to match growing countries such as China, and how much we should do our own thing."

Link to The Guardian

"From a proposed new Thames Hub, comprising an international airport, railway terminus, freight depot and port along with a new Thames Barrier sited all together in the Thames estuary, a new four-track high-speed orbital passenger and freight railway would run around the north of London before joining main lines to Glasgow, Edinburgh, Liverpool, Manchester, Hull, Felixstowe, Cardiff and Southampton."

"The latest addition to the South Kensington campus is a rather uptight experiment in improving the experience for these visitors. Architect Dixon Jones, best known to Londoners for the Royal Opera House refurbishment completed in 1999, has laid out new chequered paving on Exhibition Road in black and white granite, stretching unbroken, building-to-building, across what was once pavement and carriageway.

"It is at the same time a traffic-calming measure, a new, more civilised waiting area for tourist crowds, and one of the grandest (and possibly most expensive, at £25 million) pieces of public realm design in London's recent history, reaching 800 metres from South Kensington Tube station right up to Hyde Park."
No comments:

"George Osborne dropped the clearest hint yet that the government is warming to the notion of an airport on the Thames estuary, possibly built on this peninsula, as he pledged to 'explore all options for maintaining the UK's aviation hub status'. For residents of Grain village, it was confirmation that kickstarting the British economy poses a threat to their homes. ...

"The chancellor begs to differ. He is sold on the idea that infrastructure investment can boost the UK by providing economic links for business and unlocking cash from British pension funds. He also unveiled a memorandum of understanding with the National Association of Pension Funds and the Pension Protection Fund, to invest up to £20bn in projects such as power stations and high-speed rail lines, as well as the four-runway airport that would be built right over a quiet village in north Kent. A national infrastructure plan published this week mentioned 500 projects. All they need now is the money.
No comments:

"Ministers have found an extra £500million to pay for a new tunnel under the Chilterns, to pacify MPs who have been protesting against the high speed rail link between London and Birmingham."

"Officials in the Department for Transport have found the extra cash from other spending along the 100mile £32billion proposed route.

"The change to the plans will mean that a final decision on whether to give the green light to the HS2 project will now be delayed from this month to mid-January."
No comments: