Evening Standard: "This poor man's Shard will cast a blight on our homes"

"A new 35-storey skyscraper will loom over west London like a 'weak rip-off of the Shard' claim neighbours who today vowed to fight the plan.


"... The plans, submitted to Hammersmith & Fulham council by Imperial College which paid £28 million for the site two years ago, include a new campus, offices, flats and a hotel."
No comments: 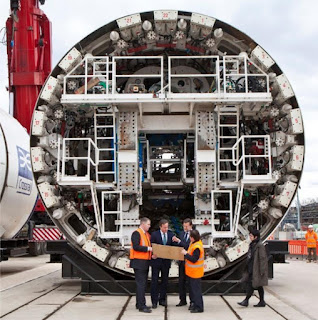 
"The Prime Minister was joined by Spanish Prime Minister Mariano Rajoy to meet engineers and construction workers and to hear more about tunnelling preparations for Europe’s largest civil engineering project.


"Construction of Crossrail’s western tunnels between Royal Oak and Farringdon is being undertaken by a UK joint venture comprising BAM Nuttal, Kier Construction and Ferrovial Agroman - the UK subsidiary of Spanish multinational Ferrovial. Over 150 people are currently employed at the Westbourne Park site."

"The £1billion scheme by shopping centre owners, Westfield, includes plans to build up to 1,522 homes, a new public green, offices and an extension of the existing shopping centre in Wood Lane with new restaurants, cafes and a leisure complex.

"Westfield will contribute £20m toward improvements to the community, including £3.9m for works to Shepherds Bush overground train station, with an extension to the ticket office, a new entrance, and for lengthening the platform. One million pounds will go towards highways and junction improvements, £450,000 to buses local transport, and £75,000 for new town centre signposts. A new bridge and pedestrian footpaths linking east and west of the site will also be built, connecting H&F with Kensington & Chelsea."
No comments:

"The Government may face a legal challenge to its £33 billion HS2 high-speed rail project, it was revealed today.

"Opponents of the scheme are also contacting the European Commission, over concerns about HS2's environmental impact."
No comments:

Secretary of State's speech on HS2


This is Justine Greening's speech delivered at the 'Making HS2 Happen' conference on 26 January, as published (audio only) by the Department for Transport.
No comments:

The facility will employ about 60 people at its peak, including the first of 15 trainees and apprentices, some of whom have been unemployed for up to 12 months.

They are among the first group of apprentices and trainees to receive training at the new Tunnelling and Underground Construction Academy (TUCA) – a facility near Ilford station that will not only train up to 3,500 people to work on Crossrail, but will also continue to operate well beyond the Crossrail project, and help the UK become a world leader in tunnelling construction."

"A research study into the potential full carbon impacts of HS2 has been commissioned from Greengauge 21 by the Campaign to Protect Rural England (CPRE), the Campaign for Better Transport (CBT) and the Royal Society for the Protection of Birds (RSPB).

"This report sets out the interim findings, highlighting the issues that we have identified as likely to be significant in the carbon case for HS2."


"The development of a nationwide high speed rail network, linking our great cities, represents the most ambitious and demanding engineering challenge of our time. It has the potential, if done correctly, to regenerate those regions which have fallen behind and open up access to parts of our country and our main airports which have previously endured poor rail access.

"... The route chosen for High Speed 2 (HS2), between London, Birmingham and onwards must not be just left to the rail industry, though their expertise and opinion is important. Many other considerations must be taken into account such as how best can we move people from air to rail, how best can HS2 help regenerate the great cities of Birmingham, Liverpool, Leeds, Manchester and on into Scotland, how can it deliver a genuine integrated transport strategy and how can it help us meet our binding environmental targets on carbon emissions?

This requires vision and conviction from today's decision takers and policymakers. This document, 'The Right Track – Delivering the Conservatives' Vision for High Speed Rail' is an exhaustive account of the history of high speed rail, the various options on the table toda,y and the leadership which has been shown in other European countries in the joined up implementation of high speed rail, particularly with aviation.

This study provides a positive framework for a future Conservative Government to secure the benefits of high speed rail for the nation, if it takes the right decisions for the right reasons."

"The Government plans to report on its HSR plans in the spring [2010]. The Bow Group, through its research for The Right Track, strongly recommends that it supports a direct HSR link to Britain's only national hub airport and thus allows it to become a truly national airport, bringing to an end its enduring lack of proper and effective public transport connection.

"For Conservative Party policy to be translated into action, we must learn the lesson of the adopted proposals for the Channel Tunnel Rail Link [HS1] where

"a number of interests came together, and a solution presented itself which met a variety of objectives international connectivity together with competitiveness, domestic rail improvement, economic and housing growth, regeneration, environmental protection and improvement."

"There are also direct parallels in that decisions were made, for example, in the case on a London station site purely because it was convenient for British Railways, not its customers, and without any discussion over the environment or development possibilities.

"Today, the continued promotion of Old Oak Common as both a London high speed rail station, and the Heathrow interchange, follows the same argument, of a redundant railway site being available and, in the narrow rail-centric view, suitable, and therefore chosen without any proper consideration of wider issues or benefits."
No comments:

'Question to the Mayor' about Old Oak Common

"Now HS2 has been given the go-ahead from the Coalition Government, can you confirm Old Oak Common will be a major interchange?"

Written response from the Mayor

"The Government’s plans for HS2 include a new interchange in west London at Old Oak Common. The current plans are to provide an interchange between Crossrail and HS2 services. However, as I stated in my consultation response in July 2011, a major new interchange in this location also needs to be integrated with the local transport network to ensure that the station is fully accessible to the surrounding area.

TfL has been developing plans to link the station to large parts of south, west and north London by providing connections to the London Overground network. In the supporting material released by the Government last week, connections to the local highway and public transport network are discussed. I was pleased to see this.

In addition, Hammersmith and Fulham have developed large scale regeneration plans for the site, designated as an Opportunity Area in the London Plan. The GLA will be leading an Opportunity Area Planning Framework (OAPF) study to ensure that a coordinated approach to planning at Old Oak Common is developed in conjunction with the surrounding boroughs.

TfL will be working very closely with HS2 Ltd over the coming months to ensure that the opportunity for Old Oak Common to become a major interchange and development opportunity is realised, if at all possible."