"The long term vision for this area is to transform it with substantial mixed-use regeneration, made possible principally by the projected HS2 rail line and Crossrail.

"This could provide thousands of homes, jobs and supporting facilities in a high quality environment focused on the Grand Union Canal, and securing future growth for London in a very sustainable way."

Evening Standard: "Boris Johnson: my vision of an airport city on Thames (inspired by India)"

"Boris Johnson today set out his vision to build an “aerotropolis” around a new terminal in the Thames Estuary.

"A town of about 20,000 people could spring up to the east of London, based around a four-runway hub airport.

"It would have four or five 'anchor' developments such as a hospital, university campus, a major business or exhibition centre to create thousands of jobs. A social infrastructure including homes, schools, shops, parks and a transport network would be a key part of the plan."
No comments:

The Guardian: "Earls Court: Kensington and Chelsea's go ahead can't hide the contradictions"

"Much of the formal foundation is now in place for Sir Terry Farrell's high rise 'villages' to soar from the rubble of the exhibition centres and, across the borough border, of the West Kensington and Gibbs Green housing estates, whose residents oppose demolition by a margin of at least three to one, according to the council's own assessment of responses to its consultation, though you'd never guess that from this finely-spun press release, which also pretends that people living in the surrounding area are firmly in support.

"The truth is that only a minute percentage of them answered the council's call for their views, whereas the response from the secure council tenants, housing association tenants, leaseholders and freeholders who live on the estates was impressive."
No comments:

"A plan to demolish Earls Court Exhibition Centre and replace it with thousands of new homes has been approved.

"Developers say they want to turn the 77-acre site into a 'new London district' by creating four 'urban villages' and a '21st century high street'.

"The plans are based on designs by architect Sir Terry Farrell and would create 7,500 houses and 12,000 permanent full-time jobs, according to developers Capital Counties Properties PLC (Capco)."

"As two of Britain's finest stately homes, they have played host to royalty and presidents, and their sumptuous facades have provided backdrops to film and television costume dramas.

"But now Waddesdon Manor and Hartwell House in Buckinghamshire are to take centre stage in a saga of their own, as their powerful occupants combine to challenge the government over its plans for HS2, the high speed train line between London and Birmingham.

"In a move that threatens to become a major test of the government's claims that it will take extensive measures to minimise the impact of line, the National Trust, whichs owns Hartwell, and the Waddesdon estate, home to the financier Lord Rothschild, is to submit detailed plans for the construction of a 7km 'green corridor' running past the properties and the town of Aylesbury." 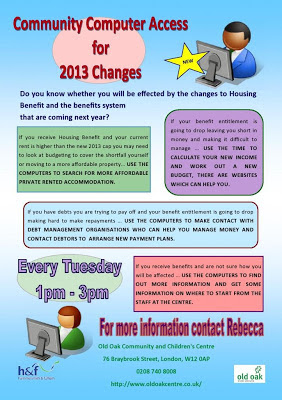 "Do you know whether you will be affected by the changes to Housing Benefit and the benefits system that are coming next year?


If you would like to see who will be affected
Or to use a benefit calculator to check what your income will be
Or contact agencies who can help you with your finances
Or begin looking for a new property with lower rent
Why not come to the centre?

The computer room is now open on Tuesday afternoons from 1-3pm for the local community to access the internet, for information or advice around housing, benefits or finances. Be prepared for April 2013." 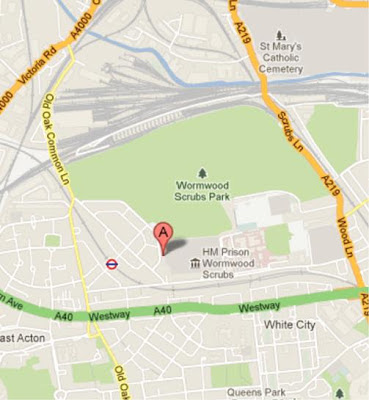 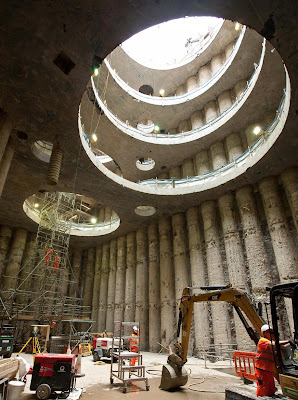 "We recently opened the doors of our Bond Street and Canary Wharf station work sites and the Tunnelling and Underground Construction Academy (TUCA) to the public, as part of the Open House London weekend.

"This exciting annual event showcases London’s unique architecture and allows people to visit buildings and spaces that are not generally open to the public.

"Visitors to the Bond Street and Canary Wharf station sites enjoyed engineer-led tours and bird’s eye views of the works. TUCA visitors learned how the striking contemporary design overcame site constraints, how money was saved during construction and an 'Excellent' sustainability rating was achieved.

"Over 700 people visited Crossrail sites over the Open House weekend.

"The Paddington station site also recently held an open day for those interested in careers in construction. The Open Doors event provided a unique opportunity for would be workers to witness first-hand the scale and complexity of the job. Open Doors hopes that events such as this will help to attract a wider, more diverse range of talent into the construction sector."

"But only 16 per cent of MPs support the plans, according to polling by Ipsos Mori. Some 59 per cent opposed the plans, of whom 35 per cent - more than a third - said they were 'strongly opposed'. Eleven per cent of the MPs questioned refused to give their view.

"According to research released in September, the airport could be built within 14 years, only two years longer than would be needed to build a third runway at Heathrow.

"Mr Johnson has said said that with 'political will', the airport could be built in six years, with the costs in part met by private finance."

Hammersmith & Fulham: "Work with us to maximise HS2 potential"

Billions of pounds worth of economic growth would be generated if Whitehall departments worked more closely with local authorities on major infrastructure projects, according to three leading London boroughs.

Multi-billion pound schemes – like High Speed 2 (HS2) – are often planned in Government ‘silos’ limiting their potential, according to the Leaders of Hammersmith & Fulham (H&F), Westminster (WCC) and the Royal Borough of Kensington and Chelsea (RBKC).

The £32billion rapid rail link between London and Birmingham will see a new generation of high speed trains, running at speeds of up to 250mph, stopping at a major new interchange station just north of Wormwood Scrubs. [That cost is to Manchester and Leeds, not just Birmingham.]

Dubbed Park Royal City International, the interchange will be the final stop before the trains terminate at Euston. The Government has recognised the station’s vital role in taking pressure off busy central London terminals – which could not cope with 13,000 extra passengers an hour.

Around a third of all HS2 passengers are expected to transfer at Park Royal City International onto the station’s unrivalled rail and road connections.

However, there are currently no firm HS2 plans for ‘over-site’ development at the station and the local councils argue that HS2 would be capable of delivering many more new jobs and homes than currently envisaged if Government departments worked more closely with them.

If the railway design was optimised to facilitate development above and around the HS2 hub station, as well as the Kensal Green Crossrail station, the area could deliver 21,000 new homes and 196,000 new jobs. A master plan from world renowned architect Sir Terry Farrell shows how the area could become the largest regeneration project the capital has ever seen.

The additional development would be worth £74billion and up to twenty-five per cent of London’s growth over the next thirty years could be accommodated on the site, according to the ‘Tri-borough’ councils.

“A radical shift is needed in the way Whitehall interacts with councils if we are going to maximise the potential of major infrastructure projects to generate growth,” says Cllr Nicholas Botterill, H&F Council Leader. “HS2 is not just a railway line it has huge potential to be the catalyst that creates large numbers of new homes and jobs along the route. But Government departments need to work more closely with local authorities so that we rewire services around people and places rather than Government silos.”

Cllr Sir Merrick Cockell, the Leader of RBKC, added: “There is getting on for billion pounds of value locked up in the Kensal site, to unlock it we need a Crossrail station. It is not always easy to get transport specialists to see the economic case we need Central Government to step back and see the big picture and to work with local authorities to realise the potential of these sites.”

The councils argue that the current silo approach stifles the potential of major infrastructure schemes and provides very little opportunity to understand the rationale behind the decision making process, and even less scope for those outside the silo to influence decisions. Timetables are solely based on the silo’s needs and plans to create wider benefits, such as new homes and community facilities, are too often regarded as costs that risk delays.

Around half of working age adults within 1.2miles of the hub station are unemployed and parts of the area are in the bottom 1% most deprived nationally.

Cllr Botterill continues: “Maximising regeneration and development on the back of major infrastructure projects needs to be a cross-government responsibility. In the case of the HS2 that means central Government needs to work with us to ensure that the configuration of the stations and depots at Park Royal City International and Kensal support regeneration.

“If government departments heed our advice and start working more closely with us vast swathes of derelict industrial land in one of London’s poorest areas could be transformed.

“HS2 has the potential to unleash the creation of a new business hub bigger than Canary Wharf but only if the Whitehall bureaucrats start seeing this as a regeneration project, which needs local input and expertise, rather than just a railway project.”

More from The Guardian: "Earls Court project: 'They actually believe their own bullshit'."

"Regular readers will know the vital facts: the planned Earls Court redevelopment project is one of the capital's largest, with its backers promising 7,500 new homes, 6,000 of them for market sale, and economic rejuvenation for 77 acres of inner West London and its surrounding territory; those supporters include the Conservative-run boroughs of Hammersmith and Fulham (H&F), Kensington and Chelsea (K&C), their developer partner Capco and Conservative London mayor Boris Johnson, who seems extremely unlikely to use his powers to impede the scheme.

"... Sally Taylor and Diana Belshaw are the respective chairs of the tenants and residents associations (TRAs) of the two demolition-threatened estates, the West Kensington and the smaller, adjoining Gibbs Green. Both TRAs are strongly against the demolition of the estates, and favours instead taking community-led ownership of them. When I visited Sally and Diana at Sally's flat on Monday evening, I began by simply asking them to tell me why they think the Earls Court project is a bad idea."
No comments: