"So where should home buyers be looking now? One answer lies in grandly named Park Royal City, in a plan unveiled this week by architect and London master planner Sir Terry Farrell. It refers to 99-acre Old Oak Common, bigger than the whole of the Royal Docks in east London, and known for not very much except its railway depots.

"Once a green expanse, it lies north of Wormwood Scrubs and the Westway but only three miles from Oxford Circus. 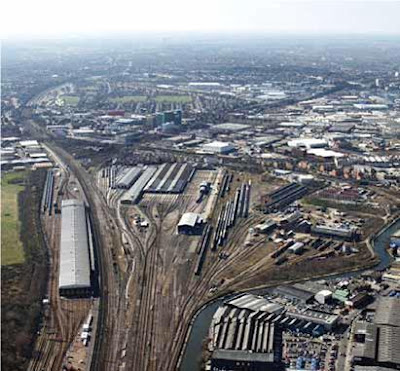 "Insiders are already scouting this hidden district of north-west London where a giant transport interchange is planned that will link with Crossrail and HS2, the proposed 'electric spine' between London and the North, a project given momentum by the Government’s £9.4 billion package of rail infrastructure investment announced last month. [The 'electric spine' is elecrification of existing rail lines, and has nothing to do with HS2.]

"Much of the land is owned by public sector bodies and is disused. Hammersmith and Fulham council believes regeneration will have a huge impact on surrounding areas such as Acton and Harlesden, and the ripple will spread to Shepherd’s Bush and White City, north Kensington and Chiswick."