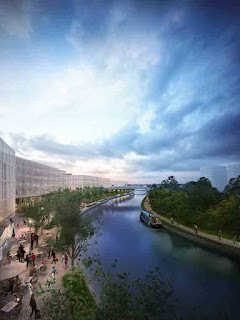 "The Old Oak and Park Royal Development Corporation (OPDC) is the second MDC in London. The OPDC came into existence on 1 April this year, to take advantage of investment in HS2 and Crossrail to develop an exemplar community and new centre in north-west London. It is one of the largest and most ambitious regeneration programmes the UK has seen since the 2012 Olympic Games."

How the OPDC works


"The principle objective of the OPDC is to establish a single body which possesses the necessary planning powers to co-ordinate regeneration, development and physical transformation across three London boroughs: Brent, Ealing and Hammersmith and Fulham. It is the mayor’s intention that this will be achieved through a strong plan, clear direction and governance structure that will support this scale of development for the benefit of the area and the communities that surround it.

"The OPDC is a functional mayoral body, however, as an MDC it is directly accountable to Londoners through an independent board. A team of officers report to a chief executive officer who is responsible for driving forward the comprehensive regeneration of this area.

"The OPDC is also a local planning authority, and its planning committee ensures decisions are made in an open, transparent and impartial manner. As part of that role, the OPDC is also responsible for the preparation of planning policy for the area, has compulsory purchase powers which it can use to facilitate this comprehensive regeneration, and can raise funds through the community infrastructure levy and section 106 agreements to support infrastructure delivery. The OPDC operates as a single voice across the three London boroughs and has been able to take part in lengthy discussions with central government to inform the Spending Review 2015 and the forthcoming Autumn Statement. Having a single organisation to drive the regeneration of the area gives greater certainty over planning and co-ordination, decision-making and investment.

"The mayor’s purpose in creating the OPDC is to provide clear leadership and co-ordination for this significant regeneration project, and to act as a single point of contact for the local residential and business communities, developers, investors, landowners and transport agencies. The OPDC has to build its reputation and credibility quickly so that it adds value to local development efforts, fostering a comprehensive and co-ordinated approach to land pooling, infrastructure delivery and masterplanning of the area by public and private sector landowners, developers, and a wide range of different stakeholders, to unlock the full potential of the area. By taking on such a task, the OPDC assumes a great deal of reputational risk."


"The LLDC was the first MDC, covering the Olympic Park and surrounding area and spanning four boroughs, and has been tremendously successful in regenerating east London. However, the LLDC was in the privileged position of owning a large portion of the development land in the area and had the Olympics as a catalyst, which helped to capture people’s imagination. It is important to consider how best to do this at Old Oak Common and Park Royal.

"The OPDC has to have a plan, drive ownership forward and ensure that there is public and private 'buy-in'. The first two years will be crucial for building a strong vision and compelling proposition for the area that gives government, the private sector, and investors the confidence to invest in the infrastructure necessary to unlock development.

"It will be important to engage existing communities in early activation activities to give them a strong sense of ownership of the emerging local plan and new neighbourhood, and give prospective new arrivals the confidence to make it their location of choice.

"The OPDC will create the foundations for transformational change through robust planning and regeneration policy and transparent governance arrangements that provide clear and consistent leadership and incentives for key stakeholders to collaborate; alongside a robust delivery programme that sets out where, and when, development will take place.

"There are other examples of successful regeneration programmes that captured the people’s imagination such as King’s Cross, where Network Rail, London & Continental Railways and Argent achieved this by attracting cultural, educational and iconic uses to the area. There are opportunities to learn from this. Planning for the longer term is important and there needs to be flexibility. However, there is also a need to build confidence and demonstrate momentum by identifying and delivering 'quick wins' to secure buy-in for the regeneration of Old Oak Common and Park Royal."


"In the 1980s, in an effort to reverse the process of inner city decline, the government set up Urban Development Corporations (UDCs). The aim was to regenerate areas that contained large amounts of derelict land by taking over planning responsibility from local councils. They had the power to acquire land, clear it and then provide infrastructure.

"They also attracted investment from the private sector by offering companies reduced taxes and other benefits and, in doing so, they promoted industrial, residential and community developments. However, they needed upfront funding to build the infrastructure and housing which could later be sold at a profit. Treasury guarantees were essential for UDCs.

"Some people see UDCs as agents of central government, imposed on local areas and denying local authorities of their normal rights and planning powers. However, the historic UDC model can be easily strengthened to make it more democratically accountable through allowing local authorities to create, and effectively own, the UDC, appointing their board and providing the operating brief. Locally based UDCs could become the contractual partner for landowners and infrastructure providers, providing transparency, clarity and greater confidence all round and helping to deliver the homes and jobs that the nation so desperately needs.

"Such transformations can already be seen in MDCs where there is accountability and, indeed, the OPDC is going one step further by ensuring the local authorities, local residents and local businesses are represented on the OPDC board and planning committee.

"These members will have a decision-making role in setting and adopting planning policy, setting CIL and determining planning applications. MDCs are also able to influence the land, whether through their sole ownership, use of compulsory purchase powers, co-ordinated delivery or the use of special delivery vehicles.

"The UDCs have played a central role in informing this learning process, both through their successes and failures. This has been done by demonstrating the importance of developing partnerships across local public and private stakeholders; the key facilitating role that local authorities can play as accountable long-term local stakeholders; and the importance of co-ordinating expenditure and programmes across the economic, environmental and social domains of regeneration.

"What the UDCs also clearly achieved was to help in the process of altering the context in which physical regeneration was tackled. Their introduction of a more single-minded and commercially sensitive approach to physical renewal attracted private sector involvement and investment into areas from which resources had previously been progressively withdrawn. This was an important spur to prompt the private sector and local authorities and other public-sector bodies to work more collaboratively.

"Large-scale development requires serious long-term commitment that can span political and economic cycles and a dedicated delivery vehicle to see it through the rocky road to completion: whether it is an MDC or a UDC. The London Docklands, east London and London Thames Gateway are different places today not only because of the often dramatic physical renewal within their areas, but because of the wider and more informed interpretation of regeneration that has in part stemmed from the inheritance of the UDC experience and in some cases the MDC." 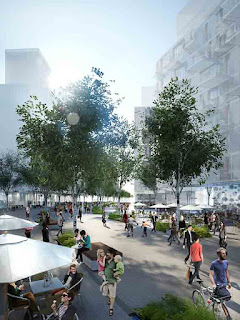 The scale of opportunity

Capacity for new homes and jobs