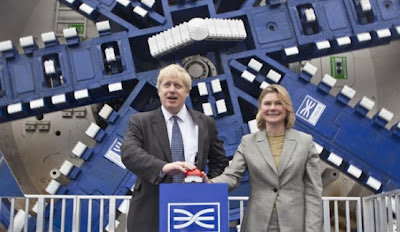 "The Mayor of London and the Secretary of State for Transport today revealed the giant 1,000-tonne tunnel boring machines that will carve Crossrail’s tunnels under the capital.

"Almost 40 years after the new railway was proposed, this marks a significant milestone in the delivery of this major transport infrastructure project, set to add £42 billion to the economy and create thousands of jobs.

"Today, the first of eight enormous machines, each 150 metres long and weighing 1,000 tonnes, will begin their journey to the Royal Oak Portal in west London from where, next week, they will start tunnelling 6.4 km (four miles) east to Farringdon via Bond Street and Tottenham Court Road. The machines are equivalent to 14 London buses end to end with enough force to lift over 2,900 London taxis."