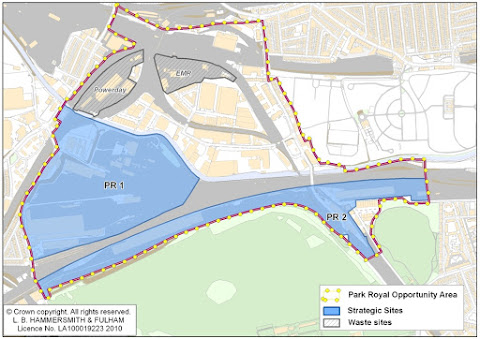 7.147 The long term vision for this area is to transform it with substantial mixed use regeneration made possible principally by the projected HS2 rail line and Crossrail.  This could provide thousands of homes, jobs and supporting facilities in a high quality environment focused on the Grand Union Canal and securing future growth for London in a very sustainable way.


The council will promote Old Oak Common Sidings and the former North Pole Eurostar depot as a location for a major rail interchange between the proposed High Speed 2 line, Crossrail, the Great Western line and West and North London lines. Subject to the Government confirming that there should be such an interchange, the Council will bring forward and consult on a revised policy and planning framework for major mixed use regeneration of the whole area.


Until such a decision is made by the Government and pending a revised policy for the whole area:


7.148 This area in the north of the borough (to the north of Wormwood Scrubs and Little Wormwood Scrubs) is in a variety of industrial uses, car sales, waste management and railway uses.  Major employers in the area are Cargiant, a major car retailer with associated workshops, and Powerday and EMR, two major waste management businesses. The remaining businesses are small enterprises occupying units in a number of small industrial estates. The regeneration area has the largest remaining concentration of industrial type premises in the borough and is included in the Park Royal Opportunity Area and is identified in the London Plan as a Strategic Industrial Location. In January 2011, the Mayor of London adopted a Planning Framework for the Park Royal Opportunity Area which has as one of its objectives "to protect and maintain Park Royal as the largest industrial employment location in London, supporting the clusters of food/drink, distribution/logistics and TV/film through facilities and services to support growth”. In Hythe Road, the opportunity to make links with Hammersmith Hospital bio-medical research should be taken to build on the national importance of that local facility.

7.149 The Grand Union Canal is a nature conservation area of metropolitan importance and the area adjoins important areas of open space.

7.150 In order to regenerate this area of underused and vacant land to the south of Willesden Junction in accordance with sustainability principles, the council will seek improved access to the area. At present, the nearest proposed station on Crossrail would be Paddington and Acton mainline. There would be considerable benefit from a station that would interchange with the West London Line. This would improve accessibility in inner West London, as well as within the borough, and help support regeneration.

7.151 In March 2010 the Government announced its intention to provide an interchange station between the planned High Speed Rail line (HS2) from London to the north and midlands, the Great Western main line and Crossrail. The council supports location of a new high speed rail hub station with links to a new Crossrail Station and the West London Line at Oak Common Sidings. In December 2010 the Government announced its intention to consult on its proposed HS2 route in 2011; this route includes a hub station at Old Oak Common.

7.152 The London Plan states that boroughs should protect and facilitate the maximum use of existing waste sites. Waste apportionment figures for the management of 348,000 tonnes of waste in H&F by 2031 will be fully met in the Old Oak Common area through maximising the potential of existing sites, namely EMR and Powerday. These sites are currently used mainly for the recycling of commercial and industrial waste (particularly metal) and for construction waste. Powerday in particular has the potential to deal with a wide variety of waste streams and to expand their capacity to include a higher proportion of municipal and commercial and industrial waste streams.

7.153 Improvements to road access to the waste sites will be sought, but the council will continue to promote further expansion in the use of rail and canal for the movement of waste and processed material. The expansion of waste management activities will not have a significant adverse impact on other uses in the area. The canal is also an important feature in the townscape and facility for leisure and recreation. This should be enhanced through canalside development.

7.154 The regeneration of this area is likely to be longer term than the other regeneration areas because of the scale of the infrastructure needed to enable significant development. However, the potential for additional housing in this area could be over 1,600 dwellings and over 5,000 jobs.

The council will pursue the regeneration of this site for a mixture of uses. It will work with partners to provide a High Speed 2 (HS2) rail hub station with links to a new Crossrail Station and the West London Line.

Any redevelopment will be expected to make the best possible use of the sites canalside location and respect the heritage assets of the area.


7.156 This site is 32.5 hectares of railway sidings and a small amount of residential bordered by the Grand Union Canal to the north and Great Western main line into Paddington to south. Willesden Junction station is 5-10 minutes walk (Rail to Euston/Watford Junction; North London Line, West London Line, Bakerloo). The site currently has poor road access. Transport for London has identified this site as a Site with Potential for Rail Freight Development, and their draft London Freight Strategy Development Control toolkit says the council should safeguard such sites for rail freight uses. However, much of the site is now owned by Crossrail for depot purposes.

7.157 The site is owned by Network Rail and Crossrail, First Great Western and Heathrow Express. The whole site is safeguarded for Crossrail. The intention is to provide 14 new Crossrail stabling sidings and a further siding incorporating a train-washing plant. This will require some remodelling of existing trackwork to accommodate the needs of other existing users within the depot. The site to be used for the sidings will also be used temporarily as a tunnel construction and fit out depot. After completion of the tunnelling works the remaining sidings and staff facilities will be constructed.

7.158 The council considers that the long term rail use of the site should be reviewed, especially in the light of the proposals for the HS2 line, to assess the extent to which rail operators need to be located here or land could be released for development. The scope for relocating these uses to the former North Pole Eurostar depot should be considered (see below). Even if railway use is maintained, sidings and depots could be decked over to provide the opportunity for substantial development, but that will require considerable improvements in public transport accessibility. However, the development potential should provide a business case for such improvements, including a Crossrail station.

7.159 This improvement to transport will enable a major new development of residential, employment uses and supporting activities and an opportunity to develop bio-medical industries and research hub linked to Hammersmith Hospital.

The North Pole Depot should be used to assist in the provision of enhanced local passenger rail services and for the possible relocation of rail operations from other locations (e.g. Old Oak Common Sidings or the TfL Lillie Bridge Depot). Passenger service use could be in connection with provision of a Crossrail station, the High Speed 2 rail line (possibly as a station site) or local services. The part of the site adjacent to Wormwood Scrubs should be considered as a possible route for enhanced road access (via a bridge) to the Old Oak Common Sidings site. These possibilities should be explored together with proposals for the Kensal Canalside Opportunity Area before any other proposals are considered.


7.160 British Railways Board Residuary (BRBR) has been asked by the Secretary of State for Transport to produce recommendations for the site’s future now that the depot has been vacated by Eurostar. The site is 1.8 miles long and extends from RBKC to Ealing. It is within the Park Royal Strategic Industrial Location (SIL) and comprises 50 acres of railway track and servicing sheds and buildings and has access from Mitre Way, Old Oak Common Lane (Ealing) and Barlby Road (RBKC). The site is strategically important for rail use and this should be the primary use.  It is acknowledged that the nature of the depot and its location next to the Great Western fast tracks limits its use although this provides an opportunity for design of an HS2 interchange station.  However, it should not change to non rail uses without a full assessment of the way in which it could contribute to enhancing passenger services or releasing railway land elsewhere that has greater potential for development. If no rail use comes forward for all or part of the Depot there will be the opportunity for alternative uses.

7.161 The site would provide an opportunity to improve road access to the Old Oak Common Sidings site if a bridge over the mainline GWR tracks was constructed.

7.162 RBKC already has aspirations for their part of the site and have identified it within the RBKC Core Strategy. The adjoining area in RBKC is identified as a new Opportunity Area known as Kensal Canalside in the London Plan. Future uses for the H & F part of the North Pole Depot site to the east of Scrubs Lane will need to be assessed having regard to proposals in the adjoining borough and any future  review of the SIL if HS2 does not proceed. There will need to be joint working to establish the best way forward for the eastern part of the site, which should be considered in conjunction with Mitre Way Industrial Estate.