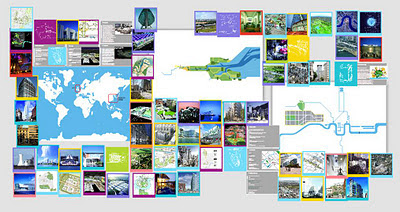 "The London Borough of Hammersmith and Fulham has commissioned Farrells to explore the potential for urban regeneration and growth around the proposed Crossrail and High Speed 2 rail interchange at Park Royal and Old Oak Common.

[Click top-right of this web site to view a video about the development from LBH&F.]

"Of the scale of Stratford or Canary Wharf, Farrells vision for over 500 hectares of West London (including Old Oak Common, the Park Royal Business Park, White City and Kensal) is focussed on the unparalleled level of accessibility of the potential ‘super hub’ interchange which would:
"Given this truly transformational level of accessibility, Farrells study concludes that there is the clear potential for a new place in London, with the ‘super hub’ interchange becoming a powerful economic driver for growth and regeneration.

"Working in conjunction with respected economists Colin Buchanan and CBRE, Farrells’ regeneration vision for 'Park Royal City' could generate an estimated 12,000 homes, 115,000 jobs, a new waterside park along the Grand Union Canal and a new rapid transit system, built on an unrivalled convergence of transport routes in west London."