British Film Institute: The Regent's Canal (soon to be part of the Grand Union) 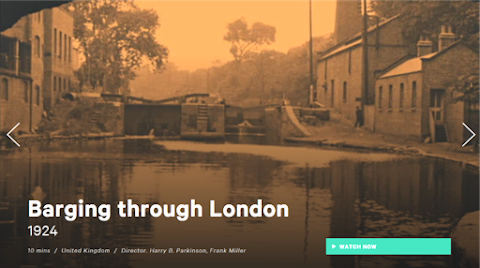 "Travelling across London via the Regent’s canal by barge affords us unusual views of the capital. From the docks in Limehouse through east London, under Mile End Road, past Whitechapel, Kentish Town, King's Cross and Camden Lock we travel past London Zoo to finish in Paddington basin.

"Based on a successful magazine, the film series 'Wonderful London' captures the life of the capital in the 1920s. These simple travelogues contrast different aspects of city life; East End and West End, poor and rich, natives and immigrants, looking beyond the stereotypes to show surprising views of the city."