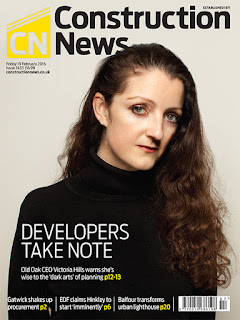 "It's the largest regeneration project in the UK and it’s moving forward at pace. With the prospect of 25,500 homes, 65,000 jobs and a transport super hub to rival King’s Cross, Old Oak and Park Royal will transform west London.

"Victoria Hills, the woman in charge of bringing the 650 ha project to life, is under no illusions as to the scale of the job. 'This is a big deal,' she says.

"The site straddles three boroughs and has a complex mix of public and private landownership, which has already sparked a major row between Queens Park Rangers FC and the world’s largest used-car dealership, Cargiant.

"It was against this challenging backdrop that London mayor Boris Johnson set up the Old Oak and Park Royal Development Corporation (OPDC) in March last year to manage the planning and development process. Ms Hills, who has more than 15 years' experience in the public sector, was named chief executive.

"Since then, planning has continued apace. The team got its Opportunity Area Planning Framework in place last November, with a Local Plan following shortly after.

" 'If you were to do a stock take of other planning authorities across London, I can guarantee that no one has moved that quickly to go from an OAPF to a Local Plan,' Ms Hills says with pride.

"These achievements are just the beginning, however.

"Why is this so important? Because, as Ms Hills points out, “the faster you go, the quicker you can de-risk the land and provide certainty to the market that this is all happening”

"... Once complete, Old Oak will be home to an impressive new transport hub, connecting Crossrail, High Speed 2 and National Rail. But there’s one problem: 'It's not designed how we or the mayor want it,' Ms Hills says.

"By investing a few hundred million in a development deck now, which would allow for commercial developments to be built above and around the station, the potential long-term upside could reach billions of pounds, Ms Hills explains.

"The OPDC is trying to secure an agreement with the government that a development deck will be built into the HS2 station design. 'There are some big government decisions that we need to influence now to avoid unintended consequences in the future,' she asserts.

" 'We're in active discussion with government at the moment about how we would have, in principle, a decision to put that aspect into a design tender. If we don’t do that this year, a big contract will go out to design a station and it won’t be designed in a way that has the maximum development potential.'

"But getting the deck would be only the start. Ms Hills also wants to be able to retain business rates and is putting pressure on government that the OPDC be allowed to do so.

"The corporation is looking to emulate the deal struck by Birmingham City Council around its HS2 station, through which the local authority has been allowed to capture business rates over a 25-year period to pay for infrastructure works.

"As for who will pay for the development deck, there are a few scenarios on the table.

"One option could see the OPDC form a joint venture with an investor that would pay for the enabling works expected to cost hundreds of millions. The investor would then take a percentage share of the uplift – '50 per cent, let's say' – of those development rights over a 20-year period.

"Ms Hills says potential investors could include Hong Kong-based railway company MTR International or property developer Related [involved with Argent in picking up the pieces of Barnet's corrupt Brent Cross planning consent]. Both are experienced in developing around stations, with Related currently building one of the biggest decks in the world in New York. I think she is inferring [sic. referring] to the Hudson Yards scheme.

" 'We'll call the shots as to what sort of place it becomes,' she adds. It's a mantra she wants to be heard loud and clear as overseas investors fly to London to meet the team.

"The high level of interest from backers only helps with the discussions she is having with government, Ms Hills insists.

" 'I can say with certainty that we have national and international interest. When we have our masterplan and a clear commercial strategy as to who we want to bring those sites to market, we’ll be ready to engage with those people who are really interested.'

"As the mayoral election edges closer, Ms Hills wants as many 'big decisions' as possible made before campaigning gets under way in earnest in the spring.

"The clock is ticking, but Ms Hills and her team are already proving they can handle the pressure."