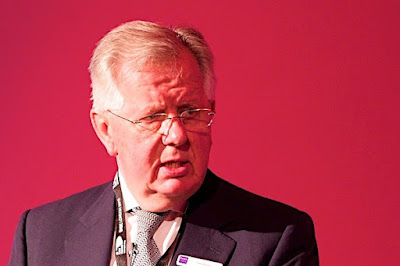 "It takes a lot to make me angry."


For instance, this and this.

"But when I see a massive opportunity to build thousands of homes and jobs in London being missed when those are the capital's top priority, I confess my blood boils. Because that is what is happening at Old Oak Common in west London.

"Several years ago, Sir Terry Farrell opened London's eyes to a part of the city that most people simply didn't recognise and with good reason - Old Oak Common is an industrial wasteland criss-crossed by railways. Terry produced a masterplan that builds on Crossrail and HS2, both of which meet at Old Oak, to create an interchange that 250,000 people a day will use. He showed how the site, which is as big as Canary Wharf and only three miles from Hyde Park, could accommodate 24,000 homes and 55,000 jobs - numbers that Boris Johnson frequently quotes and that the prime minister cited recently when he used Old Oak as an example of his new Commissioned Homes initiative. The trouble is that, as things stand, the vast majority of those homes and jobs are simply not going to happen.

"Put simply, this is a classic example of governmental pass-the-parcel, with the Department for Transport, the mayor, HS2 and Crossrail all firmly in 'Not me, guv' mode. The issue is simple. To make Old Oak work, the railways and the new depot and stabling for Crossrail, which cover a huge proportion of the site south of the Grand Union Canal, need to be decked over. [Not necessarily.] Otherwise, they leave a massive hole in the heart of Old Oak, which not only means that most of the 24,000 homes will never be built, but also that the job numbers will fall by up to three-quarters. The solution is also relatively straightforward. You pile between the tracks to support a load-bearing deck. Network Rail's own video shows CGIs of escalators taking thousands of people a day up to their 40- and 50-storey offices and homes. The project costs more than £1bn but the over-site development value is twice that.

"But this is where the saga of Old Oak Common begins to look like an episode of Yes Minister, because no one wants to take responsibility for the decking. [Which may well not be needed.] HS2 and Crossrail both say, not unreasonably, that their job is to deliver a railway on time and on budget. Their budgets don’t include decking for development. They will put a crinkly roof over their stations and make sure passengers can get from one to the other. In the case of Crossrail, the depot and stabling get the same treatment.

"Neither the Treasury nor the transport secretary want to help. They say it's the mayor's problem and frankly they're right. Having failed to act for so long, Transport for London now says it recognises this is a massive opportunity going to waste but it has a solution: it will build the depot and stabling as planned, but then knock them down a few years later and rebuild some or all of them somewhere else. Seriously. Setting aside the lack of an alternative site [could be West Drayton or Wembley], this is just never going to happen anyway. No mayor is going to sanction disruption to Crossrail only a few years after it has opened. The service disruption would be enormous and the cost astronomic. [Not a credible argument. If it's not going to be a decking solution, just close one site and open another.]

"The reality is the job is either done now or it will never be done. Homes, jobs and valuable revenue all lost because no one wanted to grasp the nettle and sort the issue out. What we end up with is another Clapham Junction. Europe’s busiest train station it may be, but 10 yards outside and you wouldn't know it. Clapham Junction may be a lost cause but there is still time - just - to rescue Old Oak. But only if the next mayor of London takes the issue a lot more seriously than the current incumbent."

QUESTIONS TO THE MAYOR


"Will you make long-term efforts to find an alternative site for the Old Oak Common Crossrail depot, or at least reduce its capacity, which would allow a concrete raft to be built over it, in order to encourage the further regeneration of the Old Oak Common area?"


"Yes, I agree that the long-term aim should be to move the depot as soon as possible to support regeneration at Old Oak Common."


"Which specific changes do you still want to see to the Government's HS2 proposals, and what are your plans to push for them?"


"There are number of changes I would like to see made to the Government's HS2 proposals, which were set out in my response to the HS2 consultation.

First, I would like to see provision for Crossrail 2 being made at Euston station. More than twice as many passengers are forecast to arrive at Euston station during the peak periods (compared to today) and this will require additional underground capacity. Without it, queues at Euston station will mean that station having to close on a regular basis.

Second, the proposed station at Old Oak Common must be compatible with the plans for the Crossrail depot at the site. The proposed layout at the site would pose significant challenges for Crossrail. In addition, further connections are required at Old Oak Common, to ensure this new interchange for west London is connected to the rest of London's transport network.

Third, the plans for a link to High Speed 1 must be altered to ensure that the link does not impact adversely on the North London Line through Camden. I am pleased that the Government has now agreed to revisit other options for this link.

I plan to raise these issues with the Secretary of State again to ensure that the remit that she sets HS2 Ltd reflects Londoners' needs."


"Please detail the transport enhancements for Old Oak Common that you have asked the Department for Transport to include in the core HS2 scheme to ensure it is accessible to the wider area."


"Old Oak Common is currently a largely 'land locked' site with very limited access by road. Whilst lots of railway lines pass through the site, none of the services running on these lines currently stop at Old Oak Common. Locating a major new rail interchange at this point would require connections to the wider transport network to allow people to access the network and to help realise the wider economic benefits of HS2 for the local area and across outer London.

There are a number of options for achieving this, including those which are outlined in the Mayor's response to the DfT's HS2 public consultation. Options include connecting the station at Old Oak Common to the nearby London Overground network to allow better orbital connectivity from south, west and north London and connecting a branch of the Bakerloo line from Queen's Park to serve the new interchange.

Hammersmith and Fulham Council also have ambitious plans to regenerate the area, making the most of the opportunity provided by HS2. Whilst we are supportive in principle of the regeneration potential of the site, any new construction must be mindful of the operation and implementation of the committed Crossrail depot.

TfL is continuing to work with HS2 Ltd on these issues."


"I have been made aware of plans to develop land at Old Oak Common which provide for a major mixed use development including industrial, research, distribution, office based and bio-tech industries related to the Hammersmith Hospital research centre. I understand regeneration of this area, which forms part of the Park Royal industrial estate, has the long term potential to bring 5,000 new jobs and 3,000 extra homes. Do you support the redevelopment of land at Old Oak Common railway sidings as a future Crossrail station and West London hub to provide a national High Speed Rail Link to Heathrow airport?"


"We are willing to discuss proposals but we need to be clear that there is an agreed Crossrail scheme, with an agreed budget and construction has recently begun. The focus is ensuring that Crossrail is delivered on time and to budget and bring the huge benefits that the scheme will provide. Any proposals that could increase costs or delay the programme would therefore clearly need very careful examination before being considered.

Much of Old Oak Common is required for the Crossrail depot, and the land is safeguarded as such in planning guidance. There are significant constraints in constructing a station on the site. There is for example no appropriate location for 250 metre long station platforms either close to the Crossrail lines or within the depot without significant relocation of existing infrastructure which is of prohibitive cost.

Recently the DfT sponsored HS2 company began looking at the viability of the site as one of several options for a potential connection between a proposed new high speed line and Crossrail. Crossrail Ltd and HS2 are continuing to keep each other informed of respective plans and any opportunities which may arise.

The GLA and LDA are also continuing to work with the local boroughs to look at major development opportunities within the area including through the Opportunity Area Planning Framework for Park Royal, the initial draft of which was consulted on in 2008. This encourages the continued development of Park Royal as a major strategic industrial location, as well as identifying other locations for additional housing next to existing Tube and rail stations. However given the concentration of heavy industrial uses at Old Oak and in particular major waste handling facilities it is not identified as a suitable location for housing in the current Framework."